Geoff Ellett from Tauranga, New Zealand, says he's been banned from his local pub of 10 years after asking for his chips to be served in a ceramic bowl instead of a mini metal bucket. Ellett used to go to the Crown & Badger once or twice a week to have a Guinness and a bowl of chips with his friends.

On two occassions he asked that his hot chips come out in a bowl instead of a bucket. The bowl would retain the heat better, as he eats them slowly while he sips his Guinness. He said he was then pulled outside by the bar manager and told to go and not come back. Ellett said the bar manager was apologetic about having to do it. 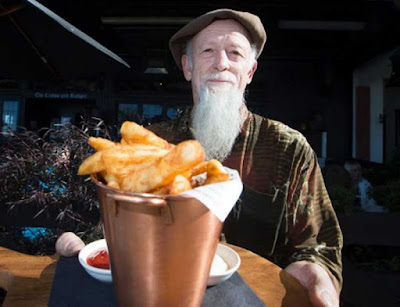 "I felt like the rug had been pulled out underneath me and I had been punched in the guts," Ellett said. "I have been a victim of an action that's not justifiable. The owner is clearly in the wrong." However, pub owner Mark Thodey says he has given Ellet a time-out from visiting the drinking hole due to "negativity". Thodey, who bought the pub three months ago, said Ellett had been harassing staff and customers the entire time he'd been owner. Furthermore, Thodey said Ellett hadn't even been banned from the bar.

He had just been told to take some time away until he could come back with a better attitude. "Ellett didn't like the changes from the beginning. He doesn't like change." Ellett was always complaining, he said. The bar is private property, not a public place, and he maintains he is well within his rights to tell people to stay away. Ellett disagrees with Thodey's version. He insists he was banned. Ellett just wants to be able to go back to the Crown & Badger and keep having a drink with his friends.
Posted by arbroath at 6:05 am
Email ThisBlogThis!Share to TwitterShare to Facebook

Hmmm. It really depends on the attitude of the patron. I bet we don't know the full story.

I hate people serving me stuff on a piece of roofing tile or on a chopping board instead of a sodding bowl or plate. Especially if it comes with its own tiny jug of gravy. If only someone would design something flat, ceramic and with edges to stop the gravy spilling all over the show. Oh well, no such thing available, I guess your table needs a good dose of gravy too.

Vote with your money, don't go back to places that serve food in a way you don't like. But you should tell them why without being an ass.