A Judge stunned a courtroom by branding three women robbers "a bunch of over-the-hill slappers".

Outspoken judge Timothy Nash came out with the rant at Canterbury Crown Court as he sentenced the trio to three years jail each for drunkenly mugging a man for his wallet in the city. 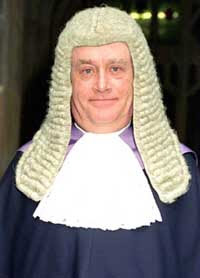 He spoke out as drunks Melanie Coombs, 39, Lorraine Hallett, 37, and Alison Raines, 41, were caged after they admitted robbing reveller James McCabe on January 19. All three have lengthy criminal records and history of alcohol abuse.

Passing sentence Judge Nash told the trio: "Any local taxpayer in Kent has a right to be angry with each of you. You are all on benefits of some kind and instead of using that money to eat and clothe yourselves and pay for residence, you spend it on alcohol. You took advantage of a vulnerable man, more vulnerable than you because he was completely intoxicated. And you were violent towards him, unnecessarily so and the other two joined in with removing his property. 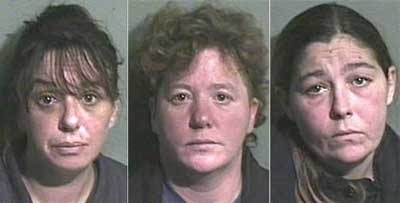 "It is a quite disgraceful offence and you all, influenced by alcohol, behaved like a bunch of over-the-hill slappers which is the picture that's portrayed by the CCTV."

A friend of the trio, speaking after the case at the homeless shelter near Canterbury East railway station, said: "They won't be happy at what the judge said. Mel's still in her 30s and none of them reckon they are over the hill. They might have let themselves go a bit but they still reckon they could pick up a fella given half a chance. But now they're inside there's not much chance of that."

Photos from here.
Posted by arbroath at 9:01 am
Email ThisBlogThis!Share to TwitterShare to Facebook