Photographer is skewered by javelin

A photographer was speared through the leg by a javelin when he got a little too close to the action at a school sports event.

Newspaper photographer Ryan McGeeney of the Standard-Examiner in Utah in the US was spared serious injury in the mishap, and even managed to snap a photo of his speared leg while others worked to help him.

"If I didn't, it would probably be my editor's first question when I got back," McGeeney said. 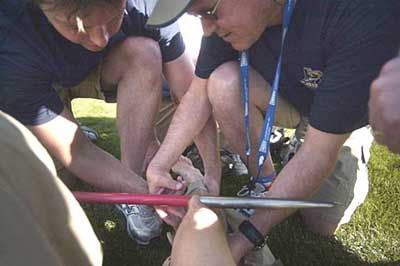 The 33-year-old, an ex-Marine who spent six months in Afghanistan, was taking pictures of the discus event and apparently wandered into off-limits area set aside for the javelin throw.

Striking just below the knee, the javelin tip went through the skin and emerged on the other side of his leg. "It wasn't real painful. ... I was very lucky in that it didn't hit any blood vessels, nerves, ligaments or tendons," McGeeney said.

Much of the javelin was cut off at the scene. The piece in McGeeney's leg was removed at a hospital, and he received 13 stitches.
Posted by arbroath at 9:43 am
Email ThisBlogThis!Share to TwitterShare to Facebook