Health officials are warning New Yorkers to stay away from an illegal aphrodisiac made from toad venom after the product apparently killed a man.

The city's poison control center issued the warning Friday after receiving a hospital report that a 35-year-old man who ingested the hard, brown substance died earlier this month.

The product is sold under names including Piedra, Love Stone, Jamaican Stone, Black Stone and Chinese Rock at sex shops and neighbourhood stores. It is banned by the Food and Drug Administration. 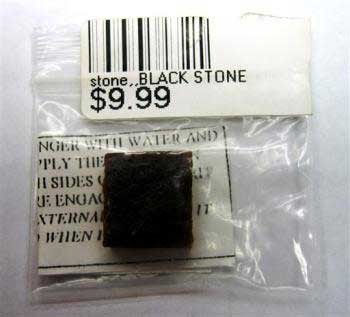 City health officials said the victim, whose identity was not released, was admitted to the hospital complaining of chest and abdominal pain. He died two days later.

Health officials said the hardened resin, made with venom from toads of the Bufo genus, contains chemicals that can disrupt heart rhythms.

The aphrodisiac was supposed to have been applied to the skin, not eaten, but authorities said even that use can be harmful. "There is no definitely safe way to use it," said Dr. Robert Hoffman, director of the city's poison control center. "Don't buy it. Don't sell it. If you have it, don't use it. Throw it out."
Posted by arbroath at 9:37 am
Email ThisBlogThis!Share to TwitterShare to Facebook