Musician Marc Playle is an international guitar idol – despite having only one arm.

Marc, 22, who was born without his lower left arm, beat 750 two-handed rivals from all over the world to reach the final of the Guitar Idol event in London. 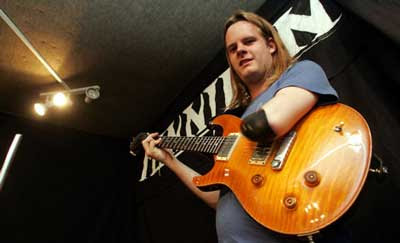 He began playing at 14 and strums using an artificial limb with a guitar pick fixed at the end.

Salesman Marc reached the last 12 of the contest to find the world’s best up-and-coming player.

He lost to Brazilian Gustavo Guerra in the final, but said: “The judges seemed impressed – one said I was in his top two acts.”

He now plans to release an album with his Durham-based band Minnikin. Marc said: “Disability doesn’t have to affect you.”
Posted by arbroath at 9:37 am
Email ThisBlogThis!Share to TwitterShare to Facebook