A Russian spa resort has built an 800lb monument to one of its most famous treatments – the enema.

The 5ft tall sculpture, a bronze syringe bulb held aloft by three Botticelli-style angels, was revealed at the Mashuk-Akva Term spa in the southern city of Zheleznovodsk.

"There is no kitsch or obscenity, it is a successful work of art," Alexander Kharchenko, the spa's director, said. "An enema is almost a symbol of our region." 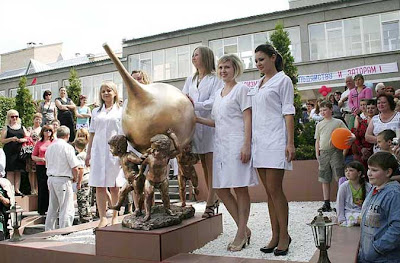 The Caucasus mountains region is famous in Russia for dozens of health spas. Many offer enemas with water drawn from mineral springs, that are said to treat digestive and other complaints.

Mr Kharchenko said the monument had cost the spa £21,000. It was installed in a square in front of his spa, with an accompanying banner declaring: "Let's beat constipation and sloppiness with enemas" posted on one of the spa's walls.

The sculptor, Svetlana Avakina, said she had designed the monument with "irony and humour" in mind and was inspired by the works of Italian Renaissance painter, Alessandro Botticelli.
Posted by arbroath at 9:42 am
Email ThisBlogThis!Share to TwitterShare to Facebook

Public Enema Number One.. LOL Up The Irons!