A depressed parrot is taking Prozac after the man who raised him from a chick died. Fred got the blues after the death of his beloved “dad” George Dance nine months ago.

The African Grey bit all his neck feathers off and bobbed his head up and down all day in a bid to fight his grief.

Animal experts believe he went into a deep depression because he could not understand why George disappeared. 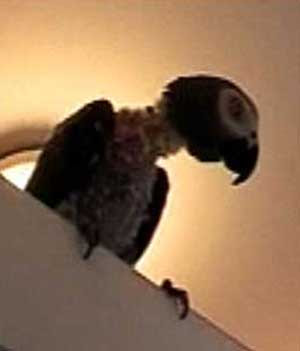 But a twice-daily liquid dose of a bird-friendly version of Prozac, called Clomical, has put him back on his perch.

George’s widow Helen, of Somerset, said: “He has been in quite a state since my husband died. Fred was very close to George and became depressed.”

Experts say tropical birds are very emotional and the number needing anti-depressants is rising.
Posted by arbroath at 9:31 am
Email ThisBlogThis!Share to TwitterShare to Facebook