Software that allows would-be thieves to make duplicate keys from single photographs has been developed by US scientists.

House keys can be cloned from photos taken on normal mobile phones, and even from shots taken over distances of hundreds of feet.

The images are scanned by a digital imaging programme that copies the exact contours of a key to create working duplicates, no matter the angle or distance at which the photos were taken. 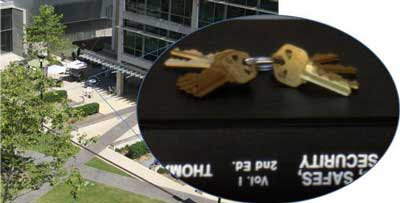 Although the software has been developed by university researchers who have pledged not to release the code, they warned that it would not be difficult for technology-savvy criminal gangs to make similar applications.

Stefan Savage, the University of California, San Diego computer science professor who led the research, warned that the public should treat a key like a credit card, and "keep it in your pocket unless you need to use it."

In one demonstration of the software, named Sneakey, researchers managed to clone a key sitting on a cafe table from a photo taken from the roof of a building 200ft away.

You can read all about the science here.
Posted by arbroath at 10:10 am
Email ThisBlogThis!Share to TwitterShare to Facebook