Chinese man stabbed in the head by his dad

A man has survived after being stabbed by his father in the head with a five-inch knife.

Thirty-eight-year-old dad Wen Wen walked into a hospital casualty room in Xi'an, central China, with the entire blade buried in his head and just the handle sticking out. 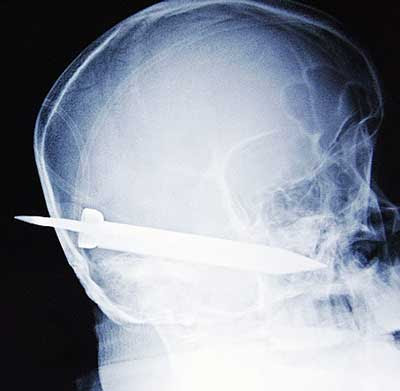 One ER nurse fainted as Wen walked up to reception at the Jiaotong University clinic with the hilt poking out of his head and casually answered questions about his injury. Wen told doctors he had been stabbed by his 76-year-old father who has now fled the family home.

"I was cleaning up the house when my father attacked me and did this with just one strike of the knife. He's old but sane and rational and I've no idea why he did it. I'm worried that he might think he's in trouble now and won't come back to the family," he said. 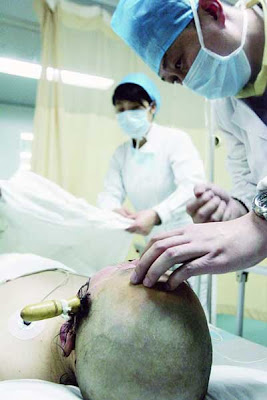 The razor sharp blade sunk into Wen's head above his right ear, down into the nasal cavity and finally emerged into his mouth.

Astonishingly it missed several major arteries, blood vessels and nerves. "He's incredibly lucky. He could walk and talk perfectly and he will make a full recovery. One or two centimetres in another direction, though, and he would be dead," said one medic.
Posted by arbroath at 10:08 am
Email ThisBlogThis!Share to TwitterShare to Facebook