Belfast Zoo tries to find out who took in WWII elephant

The search is on for the kind guardian who adopted a baby elephant and brought her up in her back garden in north Belfast during World War II.

Sheila, the elephant, had luck on her side.

Nine lions, two tigers and a number of bears and wolves were killed on the orders of the Ministry of Public Security because of fears that if a bomb hit the site of Bellevue Zoo, they would escape and pose a threat. 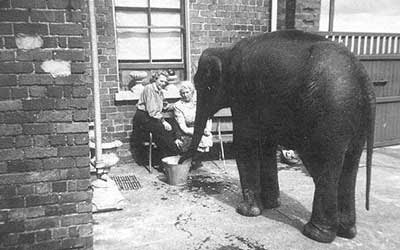 But baby Sheila dodged the death list and was re-housed by a woman who lived near the zoo and kept her in a back garden.

Who was this mysterious guardian angel? Elephants might never forget ... but humans do. The identity of the adoptive parent is a mystery. She was known only as "the elephant angel".

As the zoo celebrates its 75th birthday, it would like to find out more.
Posted by arbroath at 10:07 am
Email ThisBlogThis!Share to TwitterShare to Facebook