China's authorities have scattered 200kg of rodent contraceptive pellets across the Tibetan plateau to control what they describe as a "plague of desert rats". The growing number of rodents have been blamed for destroying fragile high-altitude grasslands and accelerating the spread of deserts. Biodiversity experts warn, however, that the extermination campaign could worsen the problem of soil degradation and the poisons could damage other parts of the plateau ecosystem.

China's chemists custom-designed the drugs to induce abortions and prevent pregnancy in "gerbils". It is possible they are referring to pika, a small cousin of the rabbit with rounded ears and long whiskers that has long been the target of government eradication campaigns.

Government workers began spreading the contraceptive in the Gurbantunggut desert last May, leaving it in pellet form near the entrance of burrows. Since then they have reportedly distributed 200kg of the drug over 49,000 hectares in China's western region of Xinjiang. They say the drug will have a minimal impact on other animals. 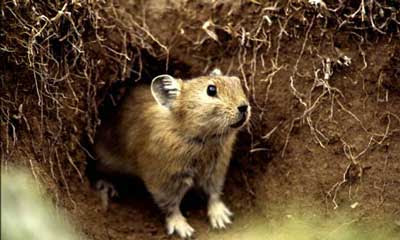 "It's a good way to tackle the desert rat plague," local forestry official Du Yuefei was quoted as saying. He claimed populations of the pest have declined almost 10% as a result of the eradication campaign. Pika and other rodents are accused of contributing to China's alarming desertification problem by over-eating grass and digging into the soil.

But foreign zoologists say the epidemic of the small mammals is a symptom rather than the cause of grassland degradation, which is mainly the result of human behaviour such as the exploitation of water resources and over-grazing.

"That the pellets have 'little effect' is highly debatable," said a conservationist who asked for anonymity. "All drugs have an effect when put into a system, on other rodents, on birds of prey that eat the rodents and so forth … It's business as usual — attack nature and hope for the best."
Posted by arbroath at 10:21 am
Email ThisBlogThis!Share to TwitterShare to Facebook