A nine-month-old duck who thinks she is a dog has been causing a stir in a seaside town.

Essy, a Cherry Valley duck, even has her own lead to go for walks around Bournemouth, Dorset, with owners Steph and Tony Tufft and their Staffordshire cross dogs Rachka, two, and DD, four.

Essy came from the same duck farm in Cadnam as the famous four-legged Stumpy and thinks she is a dog. 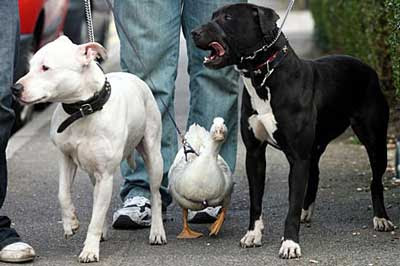 She has a bedroom in the airing cupboard but prefers to sleep with the dogs. Essy also plays in the garden with them and even competes for treats.

She has a pet passport so she can go with Mrs Tufft, 25, a dog groomer and cake decorator, and her 35-year-old husband, who is a boat builder, to Tenerife if they decide to move there.

The dogs are also very protective of Essy who was even at the Tuffts' wedding reception in Cornwall in September as a guest of honour. She was alongside the happy couple and their dogs as a figurine on their wedding cake.

There's a video here.
Posted by arbroath at 9:39 am
Email ThisBlogThis!Share to TwitterShare to Facebook