An ambulance adapted to treat drunken revellers - originally used only on special occasions - will now run in central London three nights a week.

The so-called "booze bus" has been used for the past four years at New Year and other important festivities.

It will now be a regular feature of night life every Thursday, Friday and Saturday night and more are expected to be rolled out across London later. It can take up to five people and eases the pressure on front-line ambulances. 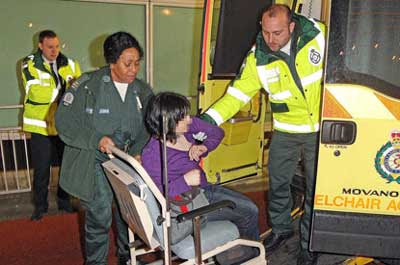 The ambulance looks like any other from the outside, but contains equipment to help people who have had too much to drink - particularly extra buckets and blankets - while on their way to hospital.

The London Ambulance Service says one journey means up to five regular ambulances can be freed up for essential, potentially life-saving, trips.

Paramedic Brian Hayes, who came up with the original idea, said: "We are getting increases of drunkenness year on year. In the past year we have had an 11% increase, which puts increased pressure on the service."
Posted by arbroath at 9:20 am
Email ThisBlogThis!Share to TwitterShare to Facebook