Japan has certified a man aged 93 as the only known survivor of Hiroshima and Nagasaki, both hit by atomic bombs towards the end of World War II. Tsutomu Yamaguchi was in Hiroshima on a business trip on 6 August 1945 when a US plane dropped the first atomic bomb.

He suffered serious burns and spent a night there before returning to his home city of Nagasaki just before it was bombed on 9 August. He said he hoped his experience held a lesson of peace for future generations.

It was already recorded that Mr Yamaguchi had survived the Nagasaki bomb but on Tuesday officials recognised that he had been in Hiroshima as well. 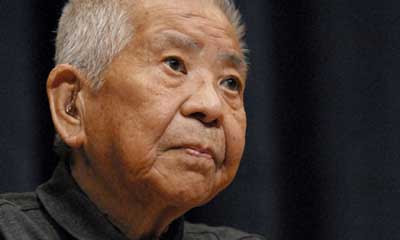 Certification as a hibakusha or radiation survivor qualifies Japanese citizens for government compensation, including medical check-ups, and funeral costs.

His double dose of atomic bombs, however, does not mean Mr Yamaguchi's compensation will increase, a Nagasaki city official said.

"My double radiation exposure is now an official government record," Mr Yamaguchi said. It can tell the younger generation the horrifying history of the atomic bombings even after I die." About 140,000 people were killed in Hiroshima and 70,000 in Nagasaki.
Posted by arbroath at 10:16 am
Email ThisBlogThis!Share to TwitterShare to Facebook