Police give ASBO warning to two-year-old

A two-year-old became the youngest child in Britain to receive an Anti-Social Behaviour Order warning after police mistakenly accused the toddler of terrorising neighbours.

Lennon Poyser, along with sisters Olivia, 5, and Megan, 4, were given written warnings after it was claimed they verbally abused neighbours and damaged property. The youngsters were even told they faced arrest if their behaviour did not improve. Officers claimed Lennon, who still struggles to walk, was responsible for kicking footballs at residents' windows - over a 7ft-high wooden fence.

But their mother Shelly Hubbard, 24, says her children are physically incapable of carrying out the crimes police suspected them of committing. She said Olivia is autistic, Megan is "painfully shy" and Lennon - who has just turned two - can barely talk. 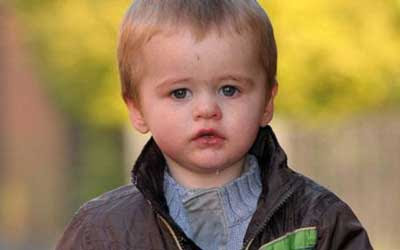 Bemused Shelly, from Lincoln, said: "I couldn't believe what I was hearing. They were accusing my tiny son of being an instigator of anti-social behaviour. It's ridiculous. The very notion of him being able to kick a proper football over a 7ft fence is laughable."

Lincolnshire Police admitted the letter had been sent to the wrong address following a number of anti-social incidents in the neighbourhold. Inspector David Legg said: "Having conducted a review of these incidents, it now transpires one of the households has been incorrectly identified to ourselves as having children who may have been responsible.

"It has since been brought to our attention that the letter sent in error was received by a family with a child of two years of age, this was clearly not intended and we apologise for any distress this may have caused."
Posted by arbroath at 9:56 am
Email ThisBlogThis!Share to TwitterShare to Facebook