A Nottingham postmaster has said he will refuse to serve people in his post office if they cannot speak English. Deva Kumarasiri, who moved to England from Sri Lanka 18 years ago, runs the Sneinton Boulevard Post Office.

Mr Kumarasiri said he could not serve people if he did not understand what they were asking for. He said he had turned away about six customers after he said they wasted his time and infuriated other customers because they could not understand English.

"If somebody stands up and says 'sorry, I can't serve you if you can't speak English', then they'll think twice," he said. "I am part of a service but how can I serve them if I don't understand what they are asking for?" 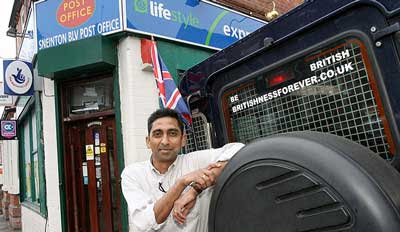 "That is what I ask everyone else to do - respect the country where you are working and living."

In a statement, Post Office Counters Ltd said its "branches were open to all customers" and "steps would be taken" to ensure this at the Sneinton store.

With news video.
Posted by arbroath at 9:28 am
Email ThisBlogThis!Share to TwitterShare to Facebook