A cat aptly named Ugly is attracting a lot of attention at a New Hampshire veterinarian, where clients say they can't take their eyes off his striking appearance.

The cat's full name is Ugly Bat Boy. He's bald in most places except for flowing fur on his chest, and he spends his days on a warm computer at Exeter Veterinary Hospital. Bat Boy has become something of a local star. 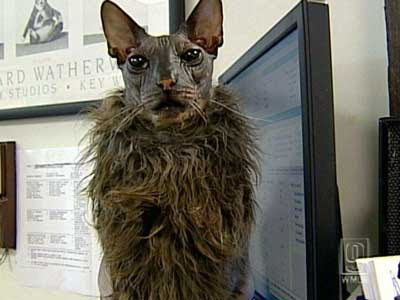 The cat's striking appearance is normal, for him. He was part of a litter of four with a sister that looked just like him. That kitten died at only a few weeks old, but that was long enough for Bassett to become enamored with Bat Boy.

Workers said many people who come into the building can't really believe what they're seeing. But they said despite appearances, Bat Boy has a nice disposition and real inner beauty.

"The impression from clients that come in is he's not real because he just sits so still, and when he does move, he scares them, but they think he's mesmerizing," Hartnett said. The office staff was getting so many questions about the cat that they put up a couple of fliers saying he's about 8 years old and perfectly normal in every way - just ugly.
Posted by arbroath at 10:21 am
Email ThisBlogThis!Share to TwitterShare to Facebook