Student Rory McInnes did some DIY at the family home — painting a 60ft penis on the roof. Parents Andy and Clare were delighted when builders finished a new flat roof on their £1million house.

But Rory, 18, had just watched a documentary about Google Earth — which lets internet users view satellite pictures — and decided to make the property stand out. He grabbed a tin of white paint and climbed up to the roof, where he spent half an hour reproducing the best-known feature of the Cerne Abbas Giant in Dorset.

For the next 12 months only Rory knew about the giant manhood on the roof near Hungerford, Berks. But his secret was blown when a helicopter pilot spotted it, and hovered so his passenger could take photos. 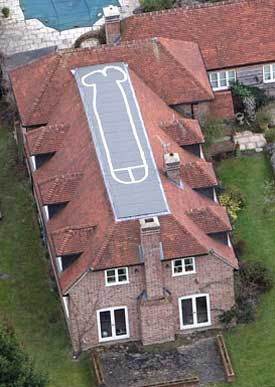 When contacted, Andy said: “It’s an April Fool’s joke, right? There’s no way there’s a 60ft phallus on top of my house.”

Andy then spoke to all four of his children demanding answers. When he phoned Rory — in Brazil as part of his gap year travels — he burst out laughing, saying: “Oh, you’ve found it then!”

Rory’s mum Clare, 49, said: “We don’t want any more children, so the idea of sleeping under a giant fertility symbol is rather worrying.” Andy added: “When Rory gets home he will be given a scrubbing brush and white spirit and he can go and scrub it off.”

There's another photo here.
Posted by arbroath at 9:59 am
Email ThisBlogThis!Share to TwitterShare to Facebook