It's a bizarre memento from an equally bizarre performer, one that Brian Blouin kept in a desk drawer for years. But now, Tiny Tim's teeth will travel to Texas.

Before he died of a heart attack in 1996, Tiny Tim — a novelty musician best known for his falsetto rendition of "Tiptoe Through the Tulips" — was contemplating oral surgery. 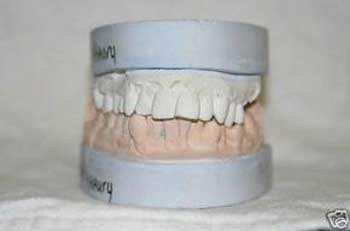 Plaster impressions of the ukulele player's top and bottom teeth were made by his dentist.

The mouldings eventually came into the possession of Boulin, 32, who first struck up a friendship with Tiny Tim when Boulin was a teenager growing up in Andover.

After years spent in his desk drawer, Boulin, now a Methuen resident, put the keepsake up for auction online late last month. It took just five days before a man from Rockwall, Texas, bought the mouldings for $1,500.

"It's a unique item," said Blouin, a patrolman with the Andover police department. "You usually don't see celebrity's dental impressions out on the market. Who knows? It might open up a trend."
Posted by arbroath at 10:14 am
Email ThisBlogThis!Share to TwitterShare to Facebook