A charity in the Saudi capital Riyadh has come up with a novel incentive to encourage young men to quit smoking - an all-expenses-paid wedding.

Hundreds of men have expressed interest in the anti-smoking drive, including a non-smoker who was ready to start the habit just so he could take part. Banners in Riyadh are advertising the campaign slogan: "Kicking the habit is on you, and marriage is on us." In much of the Arab world, the groom alone bears the cost of a wedding.

The charity Purity says participants will complete a seven-day course to quit smoking. The name of the grand prize winner will be decided in a draw on 6 August. Twenty runners-up will get free furniture. 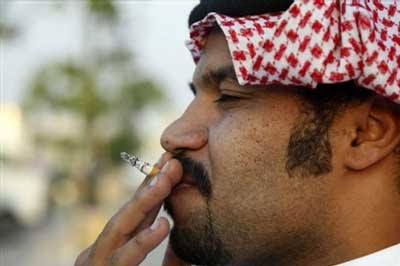 The high expense for a wedding means that Arab men often put off marriage until they have saved enough money to take a bride.

Some in Saudi Arabia have criticised the campaign, suggesting it might devalue what they consider a holy union, while others called the concept sexist.

It is estimated about a quarter of Saudi Arabia's 27.6 million residents smoke.
Posted by arbroath at 10:14 am
Email ThisBlogThis!Share to TwitterShare to Facebook