A heroic construction worker has saved a woman from drowning in a dam in a dramatic rescue. Suspended from a crane over the fast-flowing waters of the Des Moines river in Iowa, the construction worker was lowered towards the woman floundering in the swell.

The hero, named as Jason Oglesbee, managed to grab the woman’s hand and drag her from the water, carrying to the safety of a rescue boat. 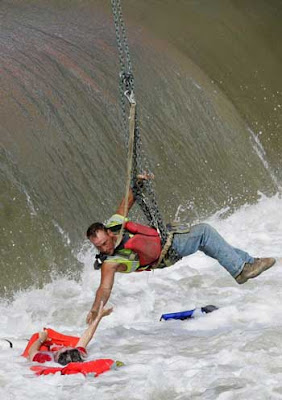 It was the second attempt by the construction crew working for Cramer & Associates to use the crane to rescue the woman.

The survivor, who has not yet been identified, is reported to be a woman around 60 years old who has been in a boat with a man of the same age that is thought to have capsized at about 4pm yesterday local time.

Rescuers pulled the man from the river, but he was not breathing. The woman was taken to hospital.

Des Moines police Sgt Joe Gonzalez said the workers saw the woman floating in a life jacket and tried to move a crane over to her. Meanwhile, fire crews tried to throw life preservers from a boat. "If it wasn't for the team effort of Cramer & Associates, we might have two drowning victims," Gonzalez said.

There's a photo gallery here.
Posted by arbroath at 10:37 am
Email ThisBlogThis!Share to TwitterShare to Facebook