Meet V.S. Saxena, 72, a retired senior engineer of the railways, who wears saffron coloured salwaar-kameez and dons anklets, bangles and earrings as he transforms himself into ‘Radha’ - the consort of Hindu god Krishna.

“I have been doing this for the past three years…It is a feeling that cannot be put into words,” Saxena, who lives in Baljati locality in Bareilly in Uttar Pradesh, said.

“By getting transformed into Radha, I get the satisfaction of serving the Lord,” added Saxena, who devotes nearly 15-18 hours a day worshiping Krishna. 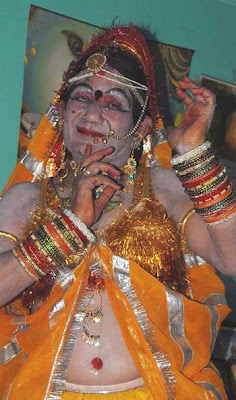 Saxena is not alone in his ‘Radha’ fixation. In November 2005, a controversy erupted when Uttar Pradesh Inspector General of Police (Rules and Manuals) D.K. Panda, a 1971 batch officer of the Indian Police Service (IPS), was found to be living as ‘Radha’ for the past 15 years.

Asked what made him choose to dress up as Radha, Saxena replied: “It all happened with god’s grace. A few years ago, I went to Vrindavan, which is deemed as playground of Lord Krishna. During that period, I also visited a number of temples. In one such temple, while I was offering prayers with closed eyes, someone clearly said in my ears ‘Tum he meri sakhi ho’ (You are my woman friend). And that day I decided to become Radha to appease my Lord.”

Saxena’s family also assists him in his unique style of worship. “Aware of the fact that I have shouldered all my responsibilities, my family members never voiced objections against my worship,” he said. “In fact, they got a small temple built for me inside the house so that I can offer prayers in seclusion without any disturbance,” he added.
Posted by arbroath at 9:26 am
Email ThisBlogThis!Share to TwitterShare to Facebook