A Chinese farmer is cashing in after managing to grow pears in the shape of babies.

Gao Xianzhang, of Hexia village in northern China's Hebei province, puts moulds on the fruit growing on the tree. And he says that after six years he has perfected his technique. 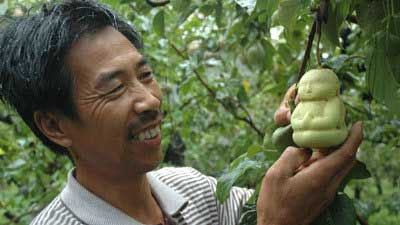 This year, he harvested more than 10,000 baby-shaped pears and sold them for the equivalent of £5 each.

Gao said: "I noticed people were selling shaped water melons for a good price, so I thought of doing something similar with my pears. 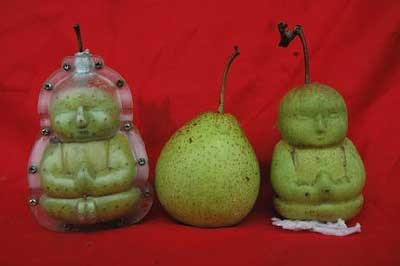 "It was more difficult than I expected. You have to test when the best time is to put the moulds on the pears is, and when to take them off again.

"If you leave the moulds on for too long, the pears start to rot inside. But I managed to work out the best way through trial and error."
Posted by arbroath at 9:57 am
Email ThisBlogThis!Share to TwitterShare to Facebook