A Thai waxworks museum has been forced to cover up a roadside billboard featuring a saluting Adolf Hitler after complaints from the Israeli and German ambassadors. The image, which was accompanied by the words "Hitler is not dead", had been condemned by foreign diplomats as "utterly tasteless".

Somporn Naksuetrong, the manager of the Louis Tussaud's Waxworks in Pattaya, apologised on Sunday. "We did not mean to cause any offence," he said. "We think he is an important historical figure, but in a horrible way."

The billboard had been up for several weeks on the main road from the capital Bangkok to the resort of Pattaya and was meant to promote the museum's planned opening next month. 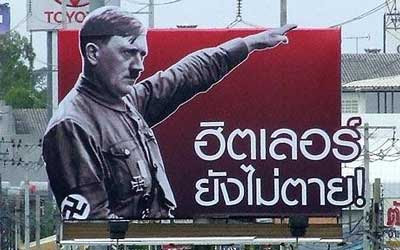 German ambassador Hanns Schumacher he told officials in Pattaya "this kind of utterly tasteless advertisement would hurt the feelings of many people" and asked that the billboard be taken down.

The Israeli ambassador Itzhak Shoham said: "It is totally unacceptable to have such a monster like Adolf Hitler on public display. How this could happen is beyond my understanding and comprehension."

The use of Nazi imagery does not stir the same emotional reaction in Asia as in the West, and Thailand has had past instances where icons of the genocidal German regime have been used for advertising and entertainment.
Posted by arbroath at 9:30 am
Email ThisBlogThis!Share to TwitterShare to Facebook