Cheeky beach signs cause a stir

A cheeky new marketing campaign is promoting Mission Beach, Australia, as an adventure capital where you can "get high, get wet and get laid". The campaign, aimed squarely at the Far North's fun-loving backpacker market, began this week with Bruce Highway billboards and is already prompting both giggles and gasps.

The tourist town south of Cairns is a hub for whitewater rafting, skydiving and diving on the Great Barrier Reef - but locals say unknowing backpackers often book the activities in Cairns and bus in and out for the day. 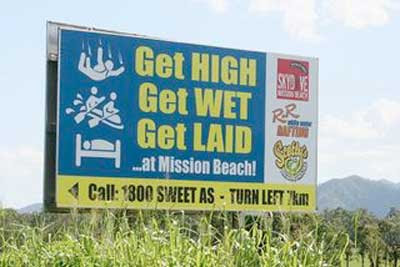 They follow a controversial tourism campaign last year titled "Cairns - Great Up Top, Fun Down Under" that led to a prime time rant from talk show comic Rove McManus for its images of a young woman in a wet T-shirt competition and its slogans such as "four play" and "get high before breakfast". Scotty's Beach House owner Boyd Scott said the new Mission Beach campaign was a lighthearted way to lure more backpackers south.

But Mission Beach Business and Tourism boss John Hill says he does not want "an Airlie Beach party town reputation" for his home town which also depends on a strong market in families and older couples. He is worried the highway signs will unnecessarily scare off tourists.

Mr Scott said people needed to lighten up.
Posted by arbroath at 9:15 am
Email ThisBlogThis!Share to TwitterShare to Facebook