Terrorists 'could use exploding breast implants to blow up jet'

Breast-implants packed with explosives could be used by terrorists to blow up an airliner, experts have reportedly warned. Radical Islamist plastic surgeons could be carrying out the implant operations in lawless areas of Pakistan, security sources are said to warned.

Explosives experts have reportedly said just five ounces of Pentaerythritol Tetrabitrate packed into a breast implant would be enough to blow a “considerable” hole in the side of a jumbo jet. It would be virtually impossible for airport security scanners to detect the explosive if hidden inside a breast, medics have said. 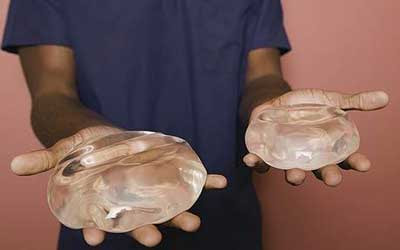 Joseph Farah, a terrorism expert, said: "Women suicide bombers recruited by al-Qaeda are known to have had the explosives inserted in their breasts under techniques similar to breast enhancing surgery." Plastic surgeons may also have inserted the chemical into the buttocks of would-be suicide bombers.

The discovery was reportedly made after Umar Farouk Abdulmutallab, a London-educated Nigerian, attempted to blow up an airliner bound for Detroit on Christmas day with explosives packed into his underpants. Hours after his attack failed, British intelligence services reportedly picked up “chatter” from Pakistan and Yemen that alerted them to the bizarre new method. One plastic surgeon said "Properly inserted the implant would be virtually impossible to detect by the usual airport scanning machines."
Posted by arbroath at 7:15 am
Email ThisBlogThis!Share to TwitterShare to Facebook

Well now that puts new meaning to saying that one finds someone Da Bomb....

I guess in that case, the only thing we can do is make women with large breasts take their clothes off at the security line so we can check for surgical scars. I mean, that is the safest way, isn't it? O:-)

I thought the new nuke-o-trons that make everyone appear naked and slightly irradiated in airports were supposed to pick up breast implants too?

@jonfen: You win the internet!

And I can't help thinking that the good boys and girls at MI6 or whatever are perhaps guilty of taking the internet too srsly.

I am suddenly not jealous of my large-boobed friend. Not implants, but HOW CAN THE TSA KNOW?!

It all gets a bit absurdish like "Allo - Allo"- In this case, not ze paynting of ze Madonna whit ze big boobies, but ze wooman whit ze exploding boobies....

I am aplying for an airport security job immediately to help with inspection.