Cheated spouses take it out on the car

Three in five people would take revenge on cheating spouses, with cars the main target of their fury, according to a survey.

Women were more likely than men to get even, with 10% of angered females targeting their man's motor, the poll of 3,000 people found.

Of those wanting to take revenge, 22-25-year-olds are most likely to smash a car windscreen, while 19-21-year-olds would damage the paintwork. 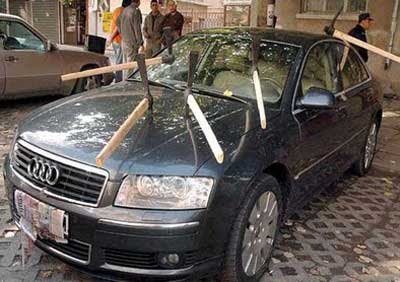 Those aged 31-35 were most likely to sell the vehicle for a few pence to get their own back. Those aged over 50 were more inclined to give their cheating partner the silent treatment, while spending as much money as possible.

The most vengeful partners are to be found in Wales, where 67% would not be able to resist getting even. Of these, around a third would target the car.

The poll found the Scots were the most likely to physically attack their partner. Other ways those polled found of taking revenge included attacking a partner's clothes and putting laxatives in their food.
Posted by arbroath at 8:02 am
Email ThisBlogThis!Share to TwitterShare to Facebook

Being said that the car in lots of cases is the extention of the genitals of the male, it makes sence that female partners would cool their anger on that part/car...

so.. if you dont own a car, you are in trouble?

Only if you live in Scotland, apparently.