It takes a set of unusual circumstances to cause an out-of-control car to crash into the fourth floor of an apartment building. The crash killed a Mentor resident. 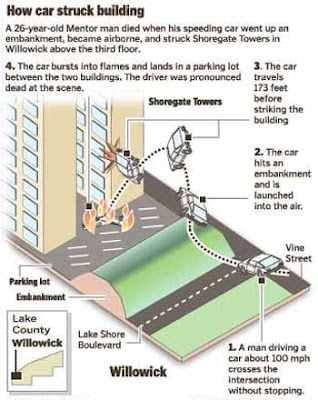 Willowick Police say Carmen Ritacco, 26, was speeding northbound on Vine Street at over 100 miles per hour early on Wednesday morning. He sped through the intersection of Vine and Lakeshore Boulevard, his car going up and over an earth mound in front of the Shoregate Towers, two high-rise apartment buildings on the lakefront.

Ritacco's car then went airborne more than 170 feet before crashing into the end of the east apartment tower, crushing the car and killing Ritacco. His car ended up on the main driveway below. 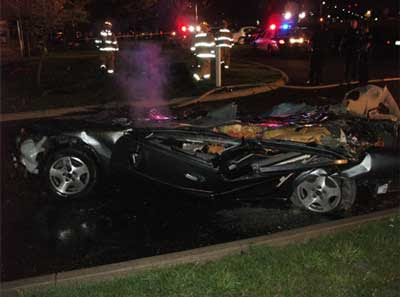 Willowick Police said Ritacco had not been the subject of a police chase. Police say he had left a Willoughby bar just before the crash.

There are more photos here.
Posted by arbroath at 8:05 am
Email ThisBlogThis!Share to TwitterShare to Facebook

Aren't most of them posthumous?

What a dick.  I'm just glad he didn't kill anybody else.