You've probably heard some pretty big fish tales about the one that got away, but this is one for the record books. Trish and Paul Tenuto fish from the Bob Sikes Bridge pier in Pensacola everyday. They sell the fish they catch to markets to make a living. But, Thursday was different than every other fishing trip they went on.

Paul hooked a huge red fish, and fought it for half an hour. Once he got the fish to the edge of the pier Trish got the net to bring it in. She said the fish was the biggest red fish she had ever seen. 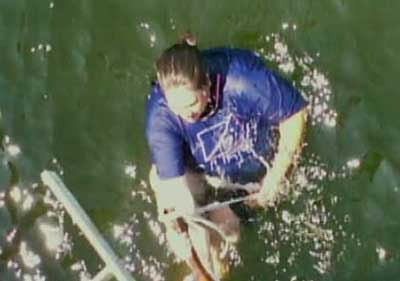 "As I was trying to pull on the rope to pull on the net, he went the opposite direction, so as I went this way, he went that way, and we all went and as you can tell there is nothing there to stop you falling," Trish said.

Trish fell from 30 feet in the air and said she landed on her face. She said it's a miracle she didn't break her neck or back. "It felt like hitting concrete and today I feel like I got hit by a freight train," explained Trish. The current was so strong Trish didn't surface until she got to the other side of the pier, which was about 15 yards wide.

Trish was able to grab onto a piling and wait for help to come. She only suffered a few bruises and scratches from barnacles, even after falling over huge concrete blocks and steel bars.

The big red fish took Trish with it while it got away, but she said she'll be back to catch him again. "He is somewhere, I'm on a mission for him," Trish said.
Posted by arbroath at 8:11 am
Email ThisBlogThis!Share to TwitterShare to Facebook

And I find it real childish of her that she says to be "on a mission for him".
The fis won this time, now let him have his life, because for humans it is all to easy to win- there really is no challenge in that.

I'm all for the human rights for fish- even Red Drum. This round is won by the fish- Let her accept her loss because even the biggest fish in the water in the end are no match for us humans.