A maintenance worker is suing his bosses for up to £10,000 after he was nearly blinded while pruning a cactus in a shopping centre. Carl Woodbridge, 22, was sprayed with toxic sap after he sliced into a branch on a 30ft tall cactus at ‘thecentre:MK’ in Milton Keynes, Bucks., in October 2008.

The liquid squirted from the plant, situated in an open walkway in the centre, into his right eye, neck, face and arm. Mr Woodbridge fell to the ground in agony with blisters to his face and body and a burned cornea which caused blindness. 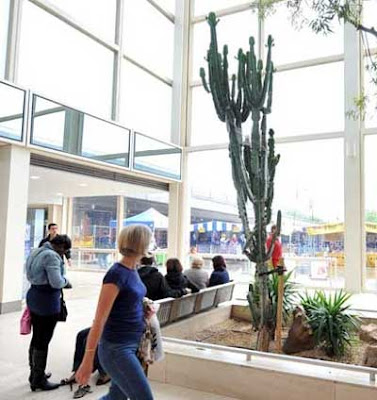 He was rushed to Milton Keynes Hospital where his eye was put under a tap for two hours before doctors scraped off a layer of latex-type film which was glued to his eyeball. A health and safety investigation revealed Mr Woodbridge, a technician for Ambius, a subsidiary of Rentokil Initial UK Ltd, was handed ”no protective clothing” and given ”inadequate” training.

His eyesight gradually returned but he must wear specialist glasses to protect his eye from the sun and bright lights. Rentokill Initial UK Ltd was fined a total of £12,000 and ordered to pay £4,000 costs after admitting health and safety breaches at Milton Keynes Magistrates’ Court last Friday. Injured Mr Woodbridge was forced to take six weeks off work and is now seeking thousands of pounds in compensation.
Posted by arbroath at 8:03 am
Email ThisBlogThis!Share to TwitterShare to Facebook

Was it too much to say, "By the way, that cactus is crazy toxic and may spit when attacked, much like a cobra"?

...and to, you know, provide safety goggles.

Companies like this, who blatantly disregard the health and safety of their employees, are the reason why you end up with health & safety regulation gone amok.

Good grief!  What kind of cactus was it?  Why on earth would anyone plant something that toxic in a public place?

The pencil cactus has toxic sap, but you can only get at it when you actually break a bit of the plant off. Otherwise it's a very pretty succulent.  As long as you don't break it, it's harmless.

How long before some unsupervised brat breaks off a piece and blinds himself, then?  Come on, lawsuit!