A robbery victim had a force on her side other than police: The force of gravity. One of two people trying to rob a 69-year-old woman in her car on Friday night accidentally dropped his handgun into her lap. She grabbed the gun and turned it on the man, chasing him off, South Daytona police said.

The suspect also dropped a cell phone, which held pictures that helped the woman identify her robber to police, they said. At about on 7 p.m. Friday, Carol J. Costello had just left the Walmart on Beville Road when a black Chevrolet Impala pulled in front and forced her to stop. A passenger armed with a silver semi-automatic handgun wrapped in a towel jumped out and tried to break the driver's-side window with the gun, police said. 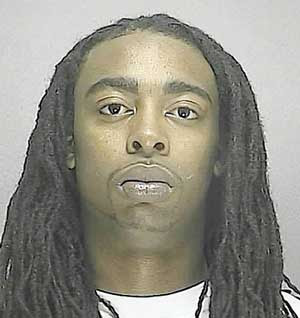 When that didn't work, he leapt onto the hood and smashed a large hole in the windshield. That's when the suspect's handgun fell through the hole and into Costello's lap. She grabbed the gun and aimed it at the suspect, who fled to the Impala.

Costello then tried to drive off, but her car struck the front of the suspects' car. She drove around the Impala and copied its tag number before it got away. From a picture on the suspect's cell phone, Costello was able to identify the man she said banged the hole in her windshield and dropped his gun. Police identified the suspect as Raymond Lewis Shepard, 25, of Daytona Beach. The Impala driver has not been identified.
Posted by arbroath at 8:05 am
Email ThisBlogThis!Share to TwitterShare to Facebook

Not enough brains to take a straight job.
Not even enough to be a bad guy...