Crash husband is kept in cage

A wife is being forced to keep her husband in a cage after doctors refused him further medication. Wu Han, 43, has to stay behind bars after a car crash left him with brain injuries that caused severe memory loss.

He is unable to remember simple things and often walks out of his house and forgets where he lives. Wife Mingmei ran out of cash to pay for drugs to help and now their local hospital in Taizhou, eastern China, refuses to hand out any more. 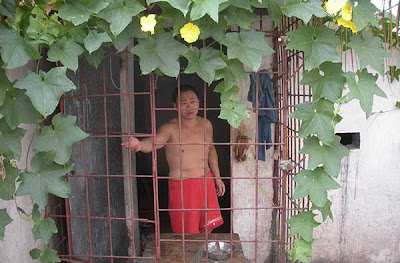 She said: "Ever since the accident he gets confused very easily and just wanders off. He means no harm but you can't leave him alone." She added: "The drugs helped because they kept him calm and he was less restless."

Now Mingmei is appealing to hospital bosses to continue treatment for Han. She said: "It is not right to keep a human being in a cage in his home. We hope his case will soften their hearts."
Posted by arbroath at 8:08 am
Email ThisBlogThis!Share to TwitterShare to Facebook