Who said lightning doesn't strike twice? That person never met 57-year-old Ernest Pullen, who became the first Missouri Lottery player in history to win $1 million or more on a Scratchers ticket more than once. 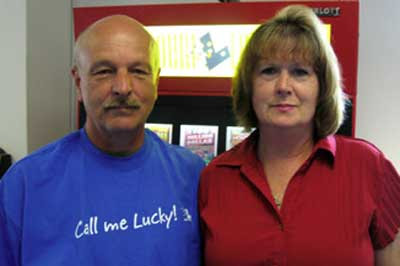 Pullen, who moved from Pevely to Bonne Terre after his first lottery win, said he dreamed of winning yet again. "All the numbers I dreamed about, and all my lucky numbers, were on the card," he said, referring to his Mega MONOPOLY winning ticket.

Pullen and his wife have opted to take the cash payment for both wins. He will receive a $1.3 million payment before taxes for the latest win. But Pullen does not think he'll win a third time. "My wife said she's winning the next time," he said.
Posted by arbroath at 8:09 am
Email ThisBlogThis!Share to TwitterShare to Facebook

I really like the writing here, it's very special and doesn't seem to exist, if there is a chance you can play at our house Live Draw Sgp Live Draw Hk Live Draw Sydney and our youtube channel at Gagal Bayar Pinjol Thank you very much