A two-week amnesty has been launched for 65 traffic cones which were stolen during Loughborough's annual fair. Charnwood Borough Council said the cones, each worth £6, are thought to have been taken as souvenirs during the event on 13 November.

Anyone dropping off a cone at the town hall, the Shopmobility Offices or Loughborough Students' Union will face no action, said the authority. David Snartt, cabinet lead for community safety, said: "The cones were in place to ensure that the emergency services could have clear access in case of injury or incident. 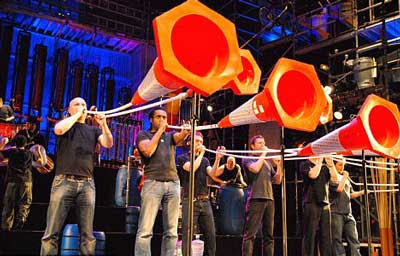 "The fact the cones were removed could have resulted in a potentially very dangerous situation, which fortunately did not happen. We want those who took them to be able to bring them back and know that there will be no consequence for their actions - a two week cone amnesty.

"However, if cones are found after this time and offenders traced the result could be a fine or even criminal record." The amnesty began on Thursday and runs until 2 December.
Posted by arbroath at 8:00 am
Email ThisBlogThis!Share to TwitterShare to Facebook