British man Richard Morwood discovered his girlfriend was the same girl whose message in a bottle he answered 30 years ago. Mandy English was just 13 when she hurled the note requesting a pen pal into the sea during a 1979 school visit to Scotland. 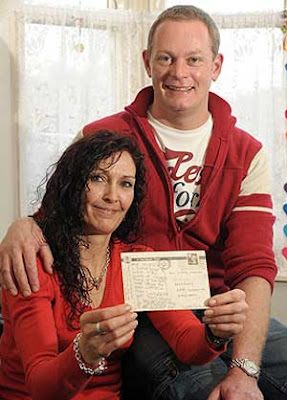 Two years later, Morwood - then just six years old - spotted the glass bottle on the beach and sent a reply by postcard. English never wrote back, but while sorting through keepsakes last week, she found the 1981 card and realised its sender had the same name as Morwood, her boyfriend since June.

She asked Morwood, 36, of Hull in northern England, if he remembered the message in the bottle - and it suddenly dawned on them that they had "met" before. "It was amazing. I then realised he was the little lad who sent me that lovely postcard all those years ago. I was so shocked I nearly passed out. It's crazy that it was Richard who wrote to me," said English, now a 44-year-old mother of three.

Morwood added, "When Mandy asked if I remembered sending a postcard, I said I had a vague recollection of finding the message, then my mum coaxing me into writing back. I couldn't believe it when Mandy told me she was the one who had put the message in the bottle. It's bizarre."
Posted by arbroath at 5:01 am
Email ThisBlogThis!Share to TwitterShare to Facebook