John Stokes owns the Players Lounge in Fairview, Dublin and this week he has enjoyed more publicity than he could have ever hoped for after putting up a banner. To be fair it's a very large banner, 60ft by 20ft, but it is the content and not the size that is causing the controversy. It has two very large pictures of the Queen and says: "She and her family are all officially barred from this pub as long as the British occupy one inch of this island they will never be welcome in Ireland." The Queen is to pay a state visit to the Irish Republic in May, the first by a British monarch since independence. Mr Stokes said:

"I just thought just in case she wanted to come in I would save her the embarrassment of being refused entry at the door and let her know in advance she wouldn't be welcome." Mr Stokes, who spent 500 euro (£433) on the banner, said he has been surprised by the reaction it has had. "It was meant to be a bit of a joke, a bit of craic. But at the same time there is a serious message in it that there are people who object to a British Queen visiting Ireland," he added. My personal objection is three-fold. Firstly the economics of it all, we can't afford to be spending 15-20m euro (£13-17m) on security, especially when we are struggling here. 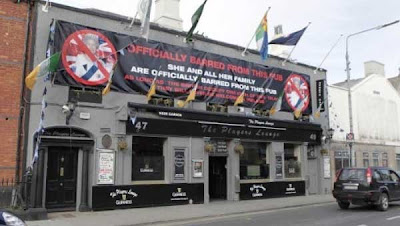 "Also the banner is a bit of tongue-in-cheek, but I know plenty of people coming from the political angle that her visiting is not right," he continued. As the head of the British forces who occupy our island, specifically the six-counties, against the will of the people, she is not welcome. You have to remember this is the same Queen that pinned medals on the paratroopers that were in Derry on Bloody Sunday and I am disgusted by that." Mr Stokes, who is the father of Celtic striker Anthony Stokes, said his son was in no way connected to the banner. Mr Stokes is due in court on Wednesday to renew his entertainments licence. He has be warned he is at risk of losing it due to the amount of complaints Irish police have received over the banner.

"I've spoken to a barrister and and I will fight this attack on my freedom of speech," he said. "The guards (Irish police) are objecting to my licence on the grounds of inciting hatred unless I take the banner down. I might have to close the pub down, but some things are more important than money. If the Queen took her crown off and came in here with a pair of jeans and a shirt on as an ordinary person she would be welcome here for a pint of Guinness. As the head of state she is not welcome and won't be for as long as I am alive."
Posted by arbroath at 5:08 am
Email ThisBlogThis!Share to TwitterShare to Facebook

What a moron. Most of the people in Eire I speak to wouldn't take the north if it was gift-wrapped. They don't even have much interest in it. I've head "Are they still killing eachother up there?" on more than one occasion.

Great idea. I'll pass this around to greek blogs so that they suggest somebody does the same with our "incompetent or traitor?" Prime Minister. ^^