Armenia is to make chess a compulsory subject in primary schools in a bid to turn itself into a global force in the game, the education ministry have said.

"Teaching chess in schools will create a solid basis for the country to become a chess superpower," said an official at the ministry, Arman Aivazian. 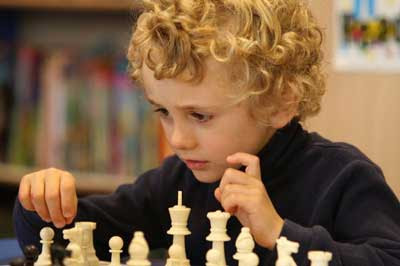 The authorities led by President Serzh Sarkisian, an enthusiastic supporter of the game, have committed around $1.43 million to the scheme - a large sum in the impoverished but chess-mad country. Children from the age of six will learn chess as a separate subject on the curriculum for two hours a week.

Aivazian said the lessons, which start later this year, would "foster schoolchildren's intellectual development" and teach them to "think flexibly and wisely". The game is hugely popular in Armenia, where grandmasters are stars and important match results make headline news.
Posted by arbroath at 7:03 am
Email ThisBlogThis!Share to TwitterShare to Facebook

What's wrong with that? If it gives some kids a new hobby and keeps them out of trouble, isn't that a good thing?

I think it's a good thing.

Can we have this in the US please?

In other countries they teach you cricket or basketbal at this age, so what's the point?

@Matthew I am a premed student who teaches chess at elementary schools in the east coast, a lot of schools in my area now have after school chess programs, so it is spreading rather quick that we also have summer camps and the demand for private tutoring has also increased

This won't stop people from having prejudices and not thinking rationally

Nothing will stop people from having prejudices and failing to think rationally.

They had this in my private school. I gotta say that I was the only one who enjoyed playing chess so much that when some people asked for it to be substituted by P.E., I complained to the school board with every possible reason why that wouldn't be a good idea. I can't say I ever gave up on reason.

Critical thinking has to develop at some point. If my parents didn't buy me a video game console when I was a kid I probably wouldn't have developed advanced problem solving skills that propelled me through AP classes all through junior high.

I don't know if this is why you said this, but religious history is also a compulsory subject in Armenia. Not world religion mind you, just the Armenian Apastolic religion.

There have been studies done that show learning chess significantly improves reading, English, and math scores, as well as general analytic skills. I think it's an awesome program.

Knowing armenians this is probably some scheme by the politicians to shuffle money around disguised as a social program.

greenyblue, regardless of the nature of your comment, either serious, immature, or racist, I, along with many people I know, take your comment as a stab to the dignity of both ourselves, and a country who has made itself known as one of the most culturally rich states on the planet. Post wisely from now on, your racists comments should have no place in public forum.

This is a wonderful idea, one which I feel should be implemented in other countries. I wish I could have been raised like this.

Greenlyblue, it's easy to stereotype, and I'm sure that there are a few that perfectly suit you. Try to look beyond your prejudicial views, and maybe you could come up with a few other more original reasons why Armenians would give such priority to the game of chess. Otherwise, to put it mildly, you sound like Aristotle who sincerely believed that women had less teeth than men, but never bothered actually to count the teeth of either gender before coming to that conclusion.

This is a fantastic idea, teaching our kids strategy and logic through chess.

alek, I've lived there and I have relatives that still live there so please get off your high horse. I'm not being racist so much as I'm being a cynic and a realist. The politicians there are so corrupt that I'm surprised the country functions at all. Those 1.46 million would have been better spent on infrastructure for factories and other production facilities which would have improved the lives of people there more than teaching kids how to play chess. I really do think it's some kind of scheme by the politicians but we'll find out in a few years when the program 'suddenly' runs out of money for some 'unknown' reason.

Indeed, its a great idea

This is such a good idea! Instead of simply teaching children facts and information, Armenia is also teaching them how to think logically.

greenlyblue, since every government is run by people, every government has corruption. Therefore, it is important to be a watchdog and question how money is being spent, but for you to immediately label an investment in education as corruption, because you "know Armenians" is irrational and ignorant.
Those kids are going to go on to run that country. Investing in their education and giving them every opportunity to develop intellectually is just as important as, if not more important than, building infrastructure for factories. Even if, as you say, a couple dollars go missing along the way, it is a step in the right direction.

"Those kids are going to go on to run that country." - No, no they're not. Most armenian politicians don't even have a second grade education. They're just thugs and hustlers that rose through the ranks running weapons back and forth between the frontlines of garabagh and azerbaijan. These are the people currently in power and you can be sure whatever social program they concoct is not going to be very social and benefit anyone other than themselves.

Greenlyblue, wow, what makes you such an extremist to that point that you are like seeking revenge. That's "dzour". Ok, they are not all saints. Look elsewhere, Nowhere it's spic and span. Moderation will make people listen to you.

Fantastic idea. I also wish I had been given the chance to learn this wonderful game at school.

Seeking revenge on who exactly? I think it's funny that whenever corruption comes up the standard response by anyone, including armenians, is "Well it's the same everywhere else". Ya, good luck with that attitude. The chasm between the corrupt rich and the general majority in armenia is so wide that the rich have their own private and personal churches. I don't care how you spin that it just looks silly when there is a government in place that allows such things. So instead of patting these assholes on the back for doing 'good' for the kids why don't you get on their case to fix the general infrastructure and social issues first so that we don't have politicians with 20 houses in europe and america and a general public that's struggling to make it.