A Circle Inspector of Police was ordered to be suspended after he went berserk by indiscriminately beating up women health workers with a lathi while they were staging a demonstration outside the office of the District Medical & Health Officer (DM & HO) in Vizianagaram, Telugu, on Thursday. 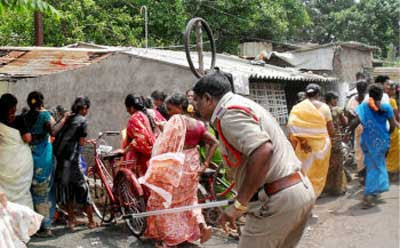 T. Trinadha Rao, the Circle Inspector, was seen raining blows repeatedly on women, included a five-month pregnant woman, while they were retreating. The voluntary health workers (Asha) are meant to counsel patients about HIV/AIDS.

Two women - Allu Satyavathi and Garbhapu Bhanu Kumari - were seriously injured in the lathi charge and were admitted to the district headquarters hospital. Twenty-four Asha workers and a few CITU leaders were arrested.

Shocked at seeing television images of the brutality of the burly officer against the hapless women, Home Minister P. Sabitha Indra Reddy asked the police top brass to act swiftly against the errant policeman. Vizianagaram Superintendent of Police Navin Gulati announced suspension of the Circle Inspector. While condemning the police behaviour, the SP, however, maintained that the police resorted to the lathi charge after a woman constable was assaulted.
Posted by arbroath at 7:06 am
Email ThisBlogThis!Share to TwitterShare to Facebook