British and American tobacco companies deliberately added powerful appetite-suppressing chemicals to cigarettes to attract people worried about their weight, according to internal industry documents dating from 1949 to 1999. Chemical additives are just one of several strategies successfully used by tobacco companies over the past 50 years to convince people that smoking makes you thin.

Tobacco giants Philip Morris and British American Tobacco added appetite suppressants to cigarettes, according to the documents, released during litigation in the US. Four other major companies tested potential chemicals, including amphetamine and nitrous oxide, better known as laughing gas, but the documents, which are incomplete, do not reveal if such chemicals were ever added and sold to the public. 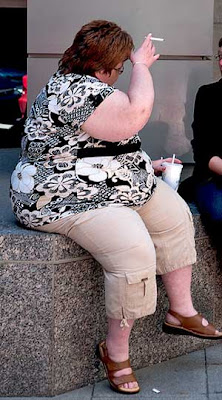 The presence of appetite-suppressing chemicals could help explain why smokers who quit often gain weight, according to Swiss researchers in the European Journal of Public Health. They call for stricter rules on tobacco additives amid suggestions that sensitive documents are being removed from databases by the industry to avoid disclosure.

Professor David Hammond, a tobacco industry expert at Waterloo University, Ontario, Canada, said: "We don't know if appetite-suppressing molecules are still added, because compliance with additive regulations is poor and sensitive internal documents are usually shredded."
Posted by arbroath at 7:04 am
Email ThisBlogThis!Share to TwitterShare to Facebook

Wow...they put poison in their poison. Who'd have guessed?

I love the photo.

Why am I not surprised by this?