Penny, a half-blind 12-year-old chihuahua with an arthritic hip and one tooth, has been added to Townsville City Council's menacing dog's list. "It is ludicrous and laughable that my little three kilogram lap dog would even scare someone," owner Diane Christensen said. "She has a severe limp so her back legs often fall to one side when she walks, she has one tooth left and she is the quietest dog in the neighbourhood. 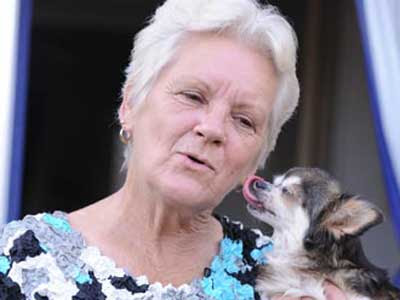 "Penny is very well behaved because she is always with me in my handbag when I'm out and she is timid too because she won't even stay in the yard alone." But council animal control officers found last week there was enough evidence the pint-sized pooch "menaced a person causing fear" and "carried out a menacing attack" on a neighbour at a Bent St unit block in Mundingburra around December 1, 2010. They issued Ms Christensen, a 61-year-old pensioner, with a regulated dog fee of $300, which means her usual $30 dog registration is increased ten fold as Penny is now classed as a menacing dog.

"I cannot afford to pay that and I won't - which means I will probably have to put my little dog down," Ms Christensen said. "She is my mate and I love her but I live fortnight to fortnight and I have no way of even finding the money after the fine and expense of putting up a new fence." When council officers paid Ms Christensen a visit to investigate the claims they found the little black, white and tan dog in an unfenced yard and not on a lead, so the owner was fined $200 plus ordered to put a fence up.

"I had to get a loan from Centrelink for $500 to get a little picket fence to keep Penny in - even though she is hardly ever outside without me and is mainly a house dog," she said. "I also have to buy her a muzzle and a lead if I want to take her out in public and put a sign up on my fence warning people that I have a menacing dog. I know she barks sometimes and is protective but this is absolutely ridiculous and I think it's just a vendetta against me from some neighbours."
Posted by arbroath at 6:06 am
Email ThisBlogThis!Share to TwitterShare to Facebook

has there been some sort of fund set up for her???