Students in a Ugandan school might not always have been happy to hear the sound of their school bell, but it turns out the alternative could have been much worse. A group that travels the country to spread awareness about the dangers of unexploded mines - still a major problem in a region that has been scarred by conflicts over recent decades - was shocked to find that teachers were using an unexploded bomb as a school bell.

Worse, the bomb was still live, even as teachers at the primary school in south-western Uganda's Kasese district banged it with a rock to call children to classes or assemblies. About 700 children attend the school. 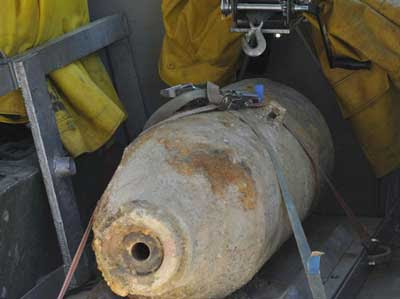 “It was a shock to us to find out that what the school was using as a bell was a bomb,” Wilson Bwambale, co-ordinator of the Anti-Mine Network Rwenzori, told the Daily Monitor. He said he noticed the problem when teachers used the bomb in his presence to call the students to order.

He said it was lucky that the teachers were only using a rock to bang on the bomb. Bwambale said the bomb was of a design that required a stronger force than impact with a rock to force detonation. “Its head was still active, which means that if it is hit by a stronger force, it would explode instantly and cause untold destruction in the area. But we withdrew it to a cordoned place, where it will soon be exploded,” Bwambale said.
Posted by arbroath at 6:03 am
Email ThisBlogThis!Share to TwitterShare to Facebook