Job-seeker Matt Epstein, 24, wasn't having any luck finding employment so he decided to get creative with his quest to work for Google. Matt made this video for the Internet giant that features himself - wearing a fake moustache, taking his trousers off, doing press-ups and getting his toes painted. 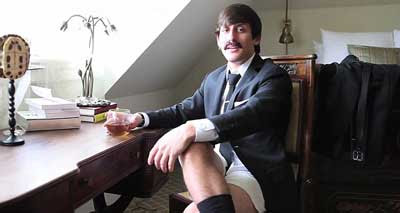 In the video Matt, from San Francisco, wears a slick suit and jokes that his hobbies include: 'Drinking Scotch, reading, working out, pedicures and animals.' Matt, who wanted to score a role in the marketing department, strokes his tash and says: 'I want to work for you. Bad. I know, I know, you look at me and all you see is a man with a moustache that makes angels weep. But I'm more than a man with a moustache.'

Two days later Matt got a call from Google and later calls Microsoft and Amazon too. In total he got over 80 job interviews from the video and although he didn't land a job at Google he got a position at US company SigFig. 'I couldn't believe it, I was flabbergasted,' he said.

Matt says he tried more traditional routes to get a job before the video but all had failed: "I had handed out resumes in person and had gone down all the usual routes to try and get a job first,' he said. He says he's thrilled with his new job at investment company SigFig and would recommend his unusual application process to others: 'I am so proud of it, I loved doing it and I think that if people approach job applications as passionate projects they'd probably see very different results,' he said.
Posted by arbroath at 6:04 am
Email ThisBlogThis!Share to TwitterShare to Facebook