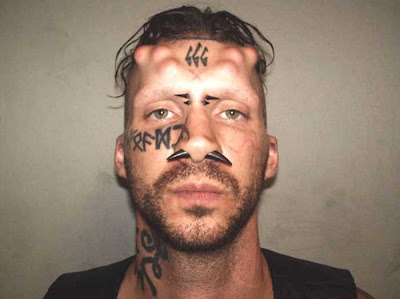 Caius Veiovis, 31, also known as Roy C. Gutfinski Jr., has subdermal implants and tattoos on his face, including "666," the sign of the devil, on his forehead. Gutfinski was preciously sentenced to 10 years' jail in 2000 (he served three) for assaulting a teenage girl in a motel room as part of a ritualistic blood-drinking ceremony, with Gutfinski's girlfriend.
Posted by arbroath at 6:06 am
Email ThisBlogThis!Share to TwitterShare to Facebook

Can't imagine that this guy could ever get a fair trial. Who would be a jury of his peers?

Gee, Shak, you may be right, but I find it hard to summon any empathy for the guy.

Kill it with fire.

My understanding is that he killed three men because one of them was a witness to a crime he committed --the other two were just in the wrong place at the wrong time. Truly evil dude.

...profiling if ever I saw it.

Fred, I'm not saying I have sympathy for him. On the contrary, I hope he rots in jail.