An Islamic cleric residing in Europe said that women should not be close to bananas or cucumbers, in order to avoid any “sexual thoughts.” The unnamed sheikh, who was featured in an article on el-Senousa news, was quoted saying that if women wish to eat these food items, a third party, preferably a male related to them such as their a father or husband, should cut the items into small pieces and serve.

He said that these fruits and vegetables “resemble the male penis” and hence could arouse women or “make them think of sex.” He also added carrots and zucchini to the list of forbidden foods for women. The sheikh was asked how to “control” women when they are out shopping for groceries and if holding these items at the market would be bad for them. 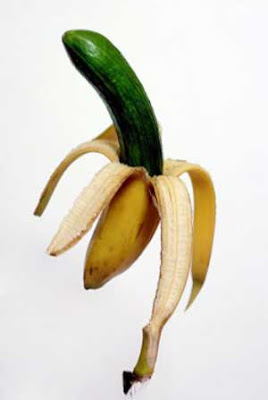 The cleric answered saying this matter is between them and God. Answering another question about what to do if women in the family like these foods, the sheikh advised the interviewer to take the food and cut it for them in a hidden place so they cannot see it.

The opinion has stirred a storm of irony and denouncement among Muslims online, with hundreds of comments mocking the cleric. One reader said that these religious “leaders” give Islam “a bad name” and another commented said that he is a “retarded” person and he must quit his post immediately.
Posted by arbroath at 6:06 am
Email ThisBlogThis!Share to TwitterShare to Facebook

What a knob! No not the cucumber, the cleric. The problem with people like this is that they have dirty minds. Clearly when he looks at a cucumber he sees a penis. When the rest of us look at a cucumber we see a cucumber.

The world is full of idiots like this. Remember Mary Whitehouse, her campain against anything at all related to sexual intercourse on TV got pretty bizarre at times. She often complained about things that only had a releationship with sex in her own twisted mind.

"The opinion has stirred a storm of irony and denouncement among Muslims online, with hundreds of comments mocking the cleric."

That's at least a step in the right direction.

Lets not forget to forbid women to drive also.

Maybe the cleric has banana envy?

C'mon people! No one has a NAME for this so-called "cleric". DisINFO big time. Cripes, get a grip folks!!

What another said. If there had been strong support for this absurd idea among Muslims, then it would have given Islam a bad name. This is actually the opposite. There are fringe loons in every group.