Fearful homeowners have been forced to keep their own front gates indoors after thieves began stealing them for raw metal.

Residents in Shirley and Freemantle, Southampton, have seen 10 front gates stolen recently as enterprising thieves try to cash in on the rising price of raw materials. 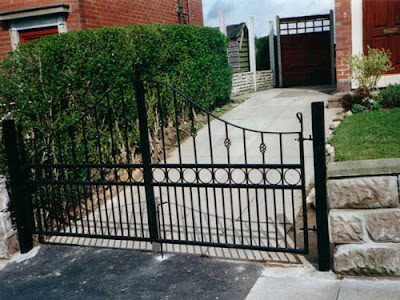 And the epidemic of gate thefts is becoming so extreme homeowners are having to lock away their gates in their own houses to keep thieves at bay. PC Jordan Williams, of Hampshire Police, said the rising price of scrap metal meant private properties were most at risk.

In Scotland, 30 homes had their gates stolen in one night by raiders who managed to get away despite having to load their haul onto trucks. Elsewhere 30 gates were taken from a street in Berkshire at the end of last year, along with livestock gates, drain covers and even guttering.
Posted by arbroath at 6:00 am
Email ThisBlogThis!Share to TwitterShare to Facebook

Obviously they need gates to protect those gates