A 30ft lamp-post with a street light on top has been stolen from the centre of Convoy, County Donegal. Thieves cut off the massive pole, worth more than €1,500, at its stump.

The pole was located beside the local Chinese takeaway on the village’s Main Street. It was a decorative lamp which was erected as part of the local Urban Renewal Scheme. 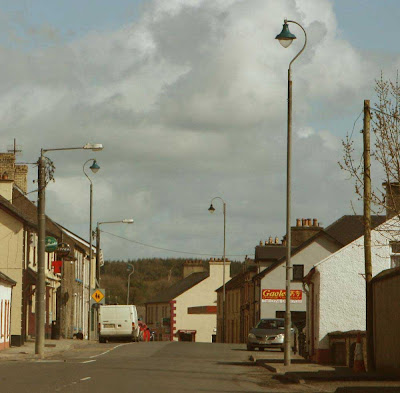 Locals noticed that, over the last 10 days, there appeared to be a “dark spot” on the village’s Main Street. “It took a while for people to cop-on what was missing but then they released there was the stump of a lamp there.

“It just shows you how far people are going now to make a few euro,” said one local. Donegal County Council confirmed that the theft of the pole and light unit had been reported to the Garda.
Posted by arbroath at 6:03 am
Email ThisBlogThis!Share to TwitterShare to Facebook