It's called the Smuggler's Inn for a reason, and a Canadian woman found out the hard way that the Blaine bed and breakfast's name is no joke to law enforcement. B.C. resident Jasmin Klair pleaded guilty in U.S. District Court in Seattle to conspiracy and possession of cocaine with intent to distribute at the end of February, after being arrested at the inn in December in a car with a vanity plead that read SMUGLER. Smuggler's Inn owner Bob Boule said that nearly 60 people per year are arrested going through the yard of the inn - located about 100 feet from the border.

The area is often monitored by federal agents, so the arrest wasn't exactly a surprise to him. It does, however, lend a bit of charm to the bed and breakfast, he said, adding "we're not encouraging smuggling." Department of Homeland Security agents were watching the inn in December after receiving a tip from a confidential informant that there was going to be smuggling activity in the vicinity, according to court documents. As they were watching, a black SUV with the license plate SMUGLER - owned by the inn - arrived, driven by the inn's owner. 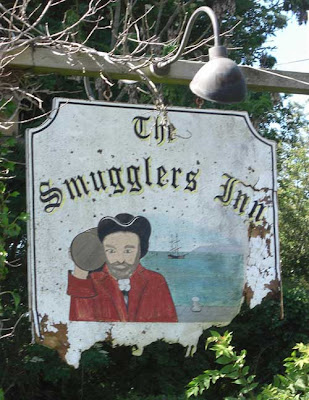 Klair was in the car along with an unrelated man that had been picked up at the airport. Agents asked Klair if a large box in the car was hers, and though she initially denied it, she later admitted it belonged to her. Inside the box, agents found nine bricks of cocaine weighing a total of nearly 11 kilograms, or about 24 pounds. Klair told agents that Gurjit Singh Sandhu said he would pay her $4,000 to go to Bellingham and pick up a package containing illicit substances.

She would then stay at the Smuggler's Inn and leave the package outside the door to her room to be smuggled into Canada. That night, agents set up surveillance and saw a car stop along Zero Avenue in front of the inn shortly before midnight. The driver and passenger illegally crossed into the U.S., and when they were near the package of drugs, agents arrested them. The men were identified as Sandhu and Narminder Kaler. Both were charged with conspiracy to distribute cocaine and attempted possession with intent to distribute. They have yet to be sentenced.
Posted by arbroath at 6:11 am
Email ThisBlogThis!Share to TwitterShare to Facebook