She's half-baked crook that just likes loafing around - now the search is on to find her hapless victims. Gillie the mischievous golden retriever has since Sunday been on a one-dog crime spree in Camden, south-west of Sydney, Australia. Owner Michael Shaw explained that his eight-year-old pooch mysteriously turned up with an unopened loaf of bread on Sunday morning, dropping it on the front step and lying down proudly next to her freshly baked trophy.

It didn’t stop there. Gillie has since returned with a total of 12 full loaves of sliced bread and two packets of muffins, despite the fact the closest shop is a 10-minute drive away. “She brings back things quite often, but normally it’s an old gumboot or something like that,” Mr Shaw, 25, said. “She has a bit of an insecurity problem so she always has things in her mouth. 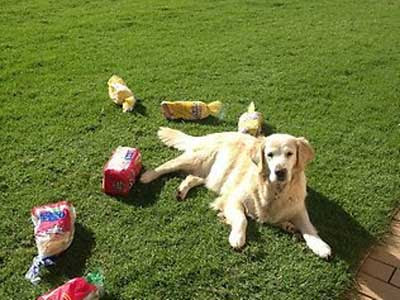 “She has a big stuffed toy and will bark at neighbours while still holding it in her mouth but she’s never brought back anything like this before. The only thing she’s eaten is the first bag of muffins and there was a new fresh bag there this morning and it was untouched.” Gillie’s modus operandi up to this point has been to deliver the loaves one-by-one at the front step, then lie amongst her baked booty proudly with a wag in her tail.

“It’s like she’s bringing us gifts - she just lies around all of them,” Mr Shaw said. He is yet to hear from neighbours about any missing baked goods, so the mystery continues. “The only thing we can think of is that a neighbour has bought some bread to give to some cows or something, but it’s completely bizarre,” he said. “She’s on a mission.”
Posted by arbroath at 6:01 am
Email ThisBlogThis!Share to TwitterShare to Facebook

I have some friends who had a collie many years ago. One night they had neighbors visiting, and the neighbor's beagle named "Fred" had wandered away several days before and hadn't been seen since. When the collie went out that evening, my friend told her, as a bit of a joke, "Go find Fred! Find Fred!"

The collie returned a couple hours later, proudly wagging her tail, carrying a loaf of bread in her mouth.