A dead humpback whale washed up in a Sydney ocean pool early on Wednesday, surprising morning swimmers and causing a major headache for rescuers who must now remove it. The 38 foot young adult humpback, which appeared to have been dead for several days, washed up at Newport beach's ocean baths overnight as rough seas lashed parts of Australia's east coast. Ocean baths are open-air man-made structures on the edge of the beach filled with sea water. 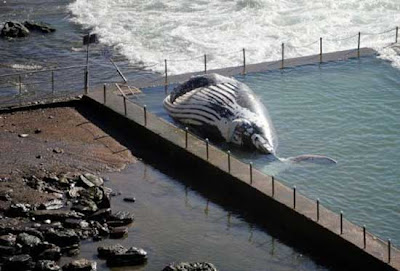 "It does have some external injuries but there's no way of knowing whether they were anti-mortem or post-mortem," said Wendy McFarlane from the Organisation for the Rescue and Research of Cetaceans in Australia (ORRCA). McFarlane said one possible explanation for the otherwise seemingly healthy animal, estimated to be about 25 to 30 tonnes, to die at sea could be that it had been struck by a ship.

Newport beach, which is north of Sydney city, was closed because of the risk of sharks being attracted to the carcass as wildlife experts mulled their best options to remove the giant creature. McFarlane said one option could be to demolish the pool wall and let the animal wash up on the beach. Another solution could be to pull it out to sea at high tide, or bring in an excavator to lift it over the damaged pool wall at low tide.

Whales are often seen off Australia's coast in June and July as they make their annual winter migration from Antarctica up to the warmer waters off Queensland state, and again as they return before November. National Parks and Wildlife Service area manager Chris Grudhoff said while a dead animal was unfortunate, it signalled there were increasing numbers of whales in the waters off Australia. "The upside of the fact that we are seeing more dead whales is that it indicates that we have a whole healthy population out there in the ocean," he said.
Posted by arbroath at 6:04 am
Email ThisBlogThis!Share to TwitterShare to Facebook

Whatever they do, they probably shouldn't blow it up with dynamite http://www.youtube.com/watch?v=8Vmnq5dBF7Y
whale shrapnel!

Heh heh, I remember that.

They decided to cut this one up with chainsaws ...

"The upside of the fact that we are seeing more dead whales is that it indicates that we have a whole healthy population out there in the ocean,"

Wow. That does not necessarily follow, and I suspect he knows this.