Eight school buses were stolen from the Far South Side of Chicago on Thursday and driven to a salvage yard, where they were cut apart and shredded into a two-story pile of scrap, police said on Friday. The name of the Sunrise Bus company could be seen among the shards of metal at Gonzalez Auto and Truck Parts. Three people were taken into custody. The 40-foot-long buses, capable of seating 75 people, were stolen sometime overnight from the bus company’s yard and were not discovered missing until Friday morning.

The buses were all equipped with GPS tracking devices, and police were able to track “their entire movement” to the scrap yard. When officers arrived, several people who apparently worked in the scrap yard ran into a building, police said. Officers initially apprehended one person and later took two others into custody. “There was a pile of shredded school buses about two stories high,” one police official said. Some pieces were large enough that police could see the Sunrise bus logo, the official said. 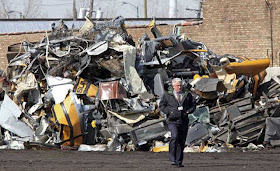 Engines and transmissions from the buses had already been cut in half, and the seats tossed in a “big pile of scrap.” An employee said the bus yard had been closed at around 7pm local time on Thursday. When workers arrived at 5am on Friday, they discovered a gate open and a snapped lock. Police arrived at the scrap yard at about 6am Greg Bonnett, president and co-owner of Sunrise, said he was told of the stolen buses at around 5:30am When the GPS signals were tracked down, Bonnett said he expected to find 8 buses parked there.

“We expected to come in and see our buses, not a mound of scrap. In 40 years I have never heard of anything like this,“ Bonnett said. Four of the buses were 2009 models, three were 2004 and one was a 2003, according to Bonnett. He said, on average, the buses were each worth at least $65,000, though some were more expensive because they were equipped with wheelchair lifts and other attachments for students with special needs. The price of scrap metal has been on the rise. One company said they pay roughly $250 per ton. The school buses weighed up to 10 tons each.

With news video. There's an additional news video here.
arbroath at 6:06 am
Share